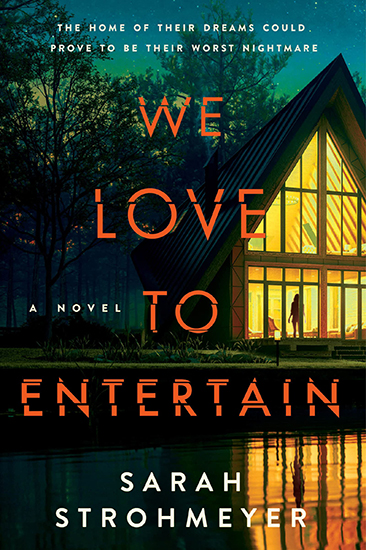 We Love to Entertain

From the bestselling author of Do I Know You? comes a fast-paced, riveting psychological thriller that skewers our modern obsession with home renovation and fixer-uppers.

Holly and Robert Barron are attractive young real-estate investors and contestants in a competition run by To the Manor Build, the nation’s most popular home renovation app. With millions in product endorsements and online followers at stake, they’re rehabbing a Vermont home they scored at a bargain price into a chic hilltop estate ideal for entertaining.

It’s all camera-ready laughs and debates over herringbone tile until Holly and Robert go missing hours after their picture-perfect wedding—leaving behind a bloody trail.

Suspicion falls quickly on Erika Turnbull, the Barrons’ twenty-something assistant—eager, efficient, and secretly in love with Robert. Did Erika let her misguided passion turn her into a murderer? So claim the townsfolk of Snowden, Vermont, who still haven’t forgiven her for a tragic accident back in high school.

But Erika’s mother, Kim, is not about to let small-town gossip and a cop with an axe to grind destroy her daughter—again. With time running out and their own lives at risk, the mother-daughter duo set out to find what really happened to the Barrons. First, though, they’ll have to confront the vengeful former owner of Holly and Robert’s estate, ruthless reality-show producers, and a secret that might bring their own house down.

Fast-paced, full of humor, and undeniably twisty, We Love to Entertain is another winner from Sarah Strohmeyer.

Goodreads Most Anticipated Mystery/Thriller of 2023

“Strohmeyer offers an original plot that keeps us guessing and entertaining writing that veers from dark humor, usually with tongue in cheek, to tragedy.”
—Booklist
“Praise to Strohmeyer for creating a novel both so funny—the behind-the-scenes details of the HGTV-like show To the Manor Build are a hoot—and so frightening. . . . This book should appear to a broad range of readers, from twenty- and thirty-somethings to cozy fans and those looking for traditional mysteries.”
—First Clue

“Diabolical and deliciously twisty…. Sarah Strohmeyer does murder and suspense in all the best possible ways!”
—Wanda Morris, award-winning author of ALL HER LITTLE SECRETS and ANYWHERE YOU RUN